There Must Be a Pony in Here Somewhere: The AOL Time Warner Debacle and the Quest for the Digital Future [Audiobook] 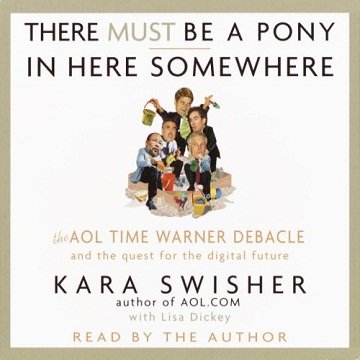 "AOL had found itself at the edge of disaster so frequently that one of its first executives, a brassy Vietnam veteran and restaurateur named Jim Kimsey, had taken the punch line of an old joke popularized by Ronald Reagan and made it into an unlikely mantra for the company. It concerned a very optimistic young boy who happened upon a huge pile of horse manure and began digging excitedly. When someone asked him what he was doing covered in muck, the foolish boy answered brightly, 'There must be a pony in here somewhere!'" (From the Prologue)
If you're wondering what happened after "a company without assets acquired a company without a clue," as Kara Swisher wryly writes, it's time to crack open this trenchant book about the doomed merger of America Online and Time Warner. On a quest to discover how the deal of the century became the messiest merger in history, Swisher delivers a rollicking narrative and a keen analysis of this debacle that is a must-listen for anyone who wants to understand what it all means for the digital future.
Packed with new revelations and on-the-record interviews with key players, it is the first detailed examination of the merger's aftermath and also looks forward to what is coming next.
It certainly has not been a pretty picture so far - with $100 billion in losses, a sinking stock price, employees in revolt, and lawsuits galore. As Swisher writes, "It is hard not to feel a bit queasy about the whole sorry mess...It felt a bit like I was watching someone fall down a flight of stairs in slow motion, and every bump and thump made me wince. It made me reassess old ideas and wonder what I had gotten wrong. And it left me deeply confused as to what had happened and, more important, what was coming next."
For Swisher, finding the answers to what went awry is important because she remains a staunch believer in the digital future - maybe not in the AOL Time Warner merger, but in the essential idea at the heart of it that someday the distinction of old and new media will no longer exist. Borrowing from Winston Churchill, Swisher calls it "the end of the beginning" of the digital revolution. "By that, I mean that it is from the ashes of this bust that the really important companies of the next era will emerge. And that evolution will, I believe, be shaped by what happened - and what is happening now - at AOL Time Warner. "
To figure it all out, Swisher takes her listener on a journey that begins with a portrait of two wildly different corporate cultures and businesses that somehow came to believe, in the crucible of the red-hot Internet era, that they could successfully join forces and achieve unprecedented growth and success. When the merger was announced in early 2000, the irresistible combination was hailed as the new paradigm and its executives - Steve Case, Jerry Levin, Bob Pittman - as popular icons of the future. But after the boom so spectacularly turned to bust and the visions of New Media Supremacy lay in ruins, Swisher searches for clues about where the merger went wrong and who is to blame.
More important, she looks to the future of both AOL Time Warner and the Internet as she seeks to answer the key question that the noise of the disaster has all but drowned out. Will the demise of the AOL Time Warner merger be the final and inevitable chapter of the dot-com debacle or will it herald a new paradigm altogether? This book, then, is a primer for the time to come, using the story of the AOL Time Warner merger as the vehicle to show the troubled journey into the future.
DOWNLOAD
(Buy premium account for maximum speed and resuming ability)

Search More...
There Must Be a Pony in Here Somewhere: The AOL Time Warner Debacle and the Quest for the Digital Future [Audiobook]

Comments
No comments for "There Must Be a Pony in Here Somewhere: The AOL Time Warner Debacle and the Quest for the Digital Future [Audiobook]".
Add Your Comments
Please Login to comment