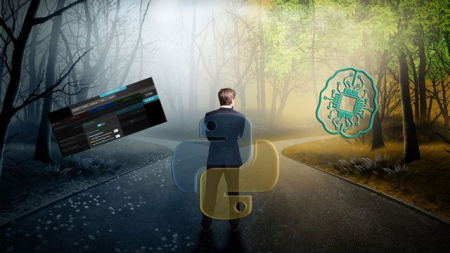 The concept and implementation of Object Oriented Programming (OOP)

How to code through full project examples

How to use and interact with files

How to package your Python programs to run on other computers

No knowledge of Python expected

Be able to use the computer at a normal level

A general idea about what programming is and does is preferable, but not mandatory

Statistically, Python is the fastest growing programming language in the world. It is a very robust cross-platform programming language that works across Windows, Linux, Mac, Android and iOS machines. That's one of the reasons a Python programmers are a valuable asset to any company, and employers know it. That's why a Python developer is one of the highest paid in the industry.

There is almost no limit to what you can use Python for. It is used in the fields of Data science, especially Machine Learning and Deep Learning, back-end web development, Ethical hacking and Pen-Testing, Eeering, Medicine, Artificial Intelligence (AI) and many more.

This course gives you the basics of Python that would allow you to have a firm grasp of the language, and is a foothold that would allow you to branch in any direction you want, acquiring new Python skills in the exact areas of interest for you, rather than inflating your head with a comprehensive list of Python commands you will almost never use.

Experienced programmers in other languages who want to learn Python

Comments
No comments for "The fundamentals of Python Programming Language (Updated 2/2020)".
Add Your Comments
Please Login to comment