The Story of Stuff: How Our Obsession with Stuff Is Trashing the Planet, Our Communities, and Our Health-and a Vision for Change 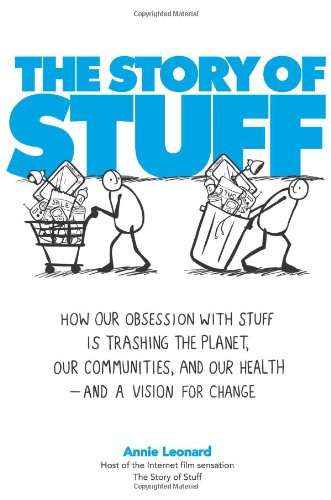 The Story of Stuff: How Our Obsession with Stuff Is Trashing the Planet, Our Communities, and Our Health-and a Vision for Change
Annie Leonard | Free Press | English | PDF

This alarming fact drove Annie Leonard to create the Internet film sensation The Story of Stuff, which has been viewed over 10 million times by people around the world. In her sweeping, groundbreaking book of the same name, Leonard tracks the life of the Stuff we use every dayâ€”where our cotton T-shirts, laptop computers, and aluminum cans come from, how they are produced, distributed, and consumed, and where they go when we throw them out. Like Rachel Carsonâ€™s Silent Spring, The Story of Stuff is a landmark book that will change the way people thinkâ€”and the way they live.

Leonardâ€™s message is startlingly clear: we have too much Stuff, and too much of it is toxic. Outlining the five stages of our consumption-driven economyâ€”from extraction through production, distribution, consumption, and disposalâ€”she vividly illuminates its frightening repercussions. Visiting garbage dumps and factories around the world, Leonard reveals the true story behind our possessionsâ€”why itâ€™s cheaper to replace a broken TV than to fix it; how the promotion of "perceived obsolescence" encourages us to toss out everything from shoes to cell phones while theyâ€™re still in perfect shape; and how factory workers in Haiti, mine workers in Congo, and everyone who lives and works within this system pay for our cheap goods with their health, safety, and quality of life. Meanwhile we, as consumers, are compromising our health and well-being, whether itâ€™s through neurotoxins in our pillows or lead leaching into our kidsâ€™ food from their lunchboxesâ€”and all this Stuff isnâ€™t even making us happier! We work hard so we can buy Stuff that we quickly throw out, and then

we want new Stuff so we work harder and have no time to enjoy all our Stuff. . . . With staggering revelations about the economy, the environment, and cultures around the world, alongside stories from her own life and work, Leonard demonstrates that the drive for a "growth at all costs" economy fuels a cycle of production, consumption, and disposal that is killing us.

It is a system in crisis, but Annie Leonard shows us that this is not the way things have to be. Itâ€™s within our power to stop the environmental damage, social injustice, and health hazards caused by polluting production and excessive consumption, and Leonard shows us how. Expansive, galvanizing, and sobering yet optimistic, The Story of Stuff transforms how we think about our lives and our relationship to the planet.

Search More...
The Story of Stuff: How Our Obsession with Stuff Is Trashing the Planet, Our Communities, and Our Health-and a Vision for Change

Related Archive Books
Archive Books related to "The Story of Stuff: How Our Obsession with Stuff Is Trashing the Planet, Our Communities, and Our Health-and a Vision for Change":

Comments
No comments for "The Story of Stuff: How Our Obsession with Stuff Is Trashing the Planet, Our Communities, and Our Health-and a Vision for Change".
Add Your Comments
Please Login to comment