The Long Gilded Age: American Capitalism and the Lessons of a New World Order [Audiobook] 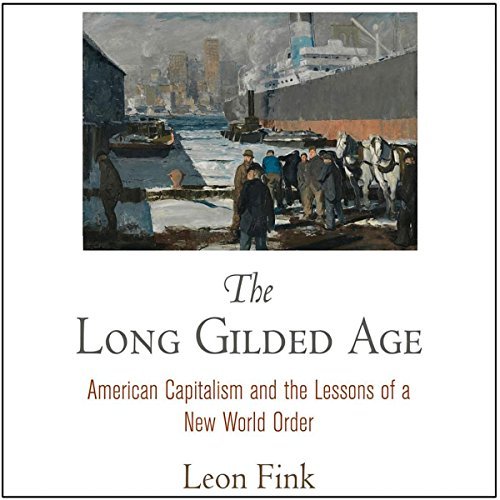 From the end of the 19th century through the first decades of the 20th, the United States experienced unprecedented structural change. Advances in communication and manufacturing technology brought about a revolution for major industries such as railroads, coal, and steel. The still-growing nation established economic, political, and cultural entanglements with forces overseas. Local strikes in manufacturing, urban transit, and construction placed labor issues front and center in political campaigns, legislative corridors, church pulpits, and newspapers of the era.
The Long Gilded Age considers the interlocking roles of politics, labor, and internationalism in the ideologies and institutions that emerged at the turn of the 20th century. Presenting a new twist on central themes of American labor and working-class history, Leon Fink examines how the American conceptualization of free labor played out in iconic industrial strikes and how "freedom" in the workplace became overwhelmingly tilted toward individual property rights at the expense of larger community standards. He investigates the legal and intellectual centers of progressive thought, situating American policy actions within an international context.
The Long Gilded Age offers both transnational and comparative looks at a formative era in American political development, placing this tumultuous period within a worldwide confrontation between the capitalist marketplace and social transformation.
DOWNLOAD
(Buy premium account for maximum speed and resuming ability)

Comments
No comments for "The Long Gilded Age: American Capitalism and the Lessons of a New World Order [Audiobook]".
Add Your Comments
Please Login to comment