The Life and Death of Adolf Hitler 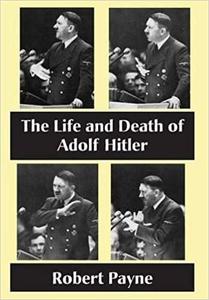 Robert Payne, "The Life and Death of Adolf Hitler"
English | ISBN: 1883283914 | 2015 | 678 pages | PDF | 6 MB
A New York Times Bestseller In The Life And Death of Adolf Hitler, biographer Robert Payne unravels the tangled threads of Hitler's public and private life and looks behind the caricature with the Charlie Chaplin mustache and the unruly shock of hair to reveal a Hitler possessed of immense personal charm that impressed both men and women and brought followers and contributions to the burgeoning Nazi Party. Although he misread his strength and organized an ill-fated putsch, Hitler spent his months in prison writing Mein Kampf, which increased his following. Once in undisputed command of the Party, Hitler renounced the chastity of his youth and began a sordid affair with his niece, whose suicide prompted him to reject forever all conventional morality. He promised anything to prospective supporters, then cold-bloodedly murdered them before they could claim a share of the power he reserved for himself. Once he became Chancellor, Hitler step by step bent the powers of the state to his own purposes to satisfy his private fantasies, rearming Germany, slaughtering his real or imaginary enemies, blackmailing one by one the leaders of Europe, and plunging the world into the holocaust of World War II. THE LIFE AND DEATH OF ADOLF HITLER is the story of not so much a man corrupted by power as a corrupt man who achieved absolute power and used it to an unprecedented degree, knowing at every moment exactly what he was doing and calculating his enemies' weaknesses to a hair's breadth. It is the story of a living man. Robert Payne (1911-1983) was born in Cornwall, U.K. His father was English, his mother French. He was educated at St. Paul's School in London and at the universities of Liverpool, Capetown in South Africa, Munich and The Sorbonne. During his lifetime he had over a hundred books published on a wide range of subjects, the widest range of any known author. He was known chiefly for his biographies and history books, among them Hitler, Lenin, Stalin, Gandhi, Leonardo, Chaplin, the Christian Centuries, The World of Art. He also wrote novels and poetry. Librarians loved him; critics raved about him. Orville Prescott of The New York Times referred to him as "a literary phenomenon of astounding versatility and industry."

Search More...
The Life and Death of Adolf Hitler

Comments
No comments for "The Life and Death of Adolf Hitler".
Add Your Comments
Please Login to comment