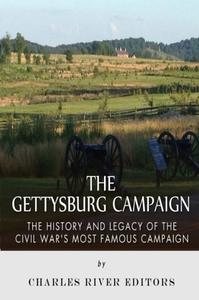 The Gettysburg Campaign: The History and Legacy of the Civil War's Most Famous Campaign by Charles River Editors
English | May 8, 2015 | ISBN: 1512099953 | 122 pages | EPUB | 1.82 Mb
*Includes pictures *Includes accounts of the fighting by soldiers and generals on both sides *Discusses the controversies surrounding the campaign, such as Stuart's ride before the battle and who's to blame for the Confederate loss *Includes online resources and a bibliography for further reading *Includes a table of contents "The failure to crush the Federal army in Pennsylvania in 1863, in the opinion of almost all of the officers of the Army of Northern Virginia, can be expressed in five words-the absence of the cavalry." - Confederate General Henry Heth "I've always thought the Yankees had something to do with it." - George Pickett Without question, the most famous battle of the American Civil War took place outside of the small town of Gettysburg, Pennsylvania, which happened to be a transportation hub, serving as the center of a wheel with several roads leading out to other Pennsylvanian towns. From July 1-3, Robert E. Lee's Confederate Army of Northern Virginia tried everything in its power to decisively defeat George Meade's Union Army of the Potomac, unleashing ferocious assaults that inflicted nearly 50,000 casualties in all. Day 1 of the battle would have been one of the 25 biggest battles of the Civil War itself, and it ended with a tactical Confederate victory. But over the next two days, Lee would try and fail to dislodge the Union army with attacks on both of its flanks during the second day and Pickett's Charge on the third and final day. Meade's stout defense held, barely, repulsing each attempted assault, handing the Union a desperately needed victory that ended up being one of the Civil War's turning points. After the South had lost the war, the importance of Gettysburg as one of the "high tide" marks of the Confederacy became apparent to everyone, making the battle all the more important in the years after it had been fought. While former Confederate generals cast about for scapegoats, with various officers pointing fingers at Robert E. Lee, James Longstreet, and James Stuart, historians and avid Civil War fans became obsessed with studying and analyzing all the command decisions and army movements during the entire campaign. Despite the saturation of coverage, Americans refuse to grow tired of visiting the battlefield and reliving the biggest battle fought in North America. The Gettysburg Campaign: The History and Legacy of the Civil War's Most Famous Campaign analyzes the entire campaign and its major battles, from Brandy Station to the retreat of Lee's army after Pickett's Charge. Along with pictures of important people, places, and events, you will learn about the Gettysburg campaign like never before, in no time at all.

Search More...
The Gettysburg Campaign The History and Legacy of the Civil War's Most Famous Campaign

Comments
No comments for "The Gettysburg Campaign The History and Legacy of the Civil War's Most Famous Campaign".
Add Your Comments
Please Login to comment