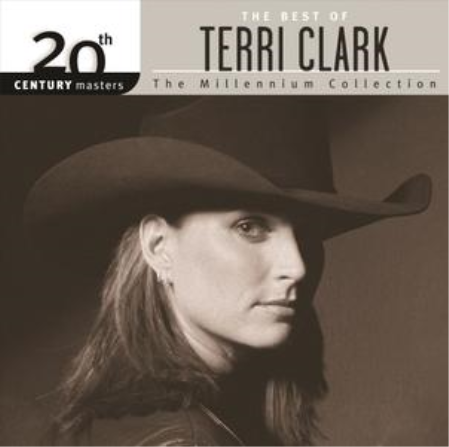 The Terri Clark title in Universal Music Group's extensive, if awkwardly titled, budget-priced best-of series, 20th Century Masters - The Millennium Collection, presents 12 tracks, every one of them a Billboard country singles chart entry between 1995 and 2005. The obvious comparison to make is between this album and Clark's earlier compilation, the 14-track Greatest Hits 1994-2004, which was selling at a list price four dollars higher as of 2006 ($13.98 versus $9.98). That set features more of Clark's big hits - "Better Things to Do," "If I Were You," and "Emotional Girl," all of which reached the country Top Ten, are included, but they are not on 20th Century Masters - The Millennium Collection. Also missing are "Every I Cry" (which hit number 12) and "One of the Guys" (which was not a chart single). On the other hand, the less-expensive disc includes "The World Needs a Drink," a Top 40 country hit released after Greatest Hits 1994-2004, and the minor chart entries "Suddenly Single" and "Unsung Hero," which are not on Greatest Hits 1994-2004. And the Top 40 country hit "No Fear" appears in its original studio version on 20th Century Masters - The Millennium Collection, having been replaced by a live version on Greatest Hits 1994-2004. So, while there is an overlap of eight tracks on the two compilations, there are several variations, too, and neither one is a comprehensive collection of Clark's hits.