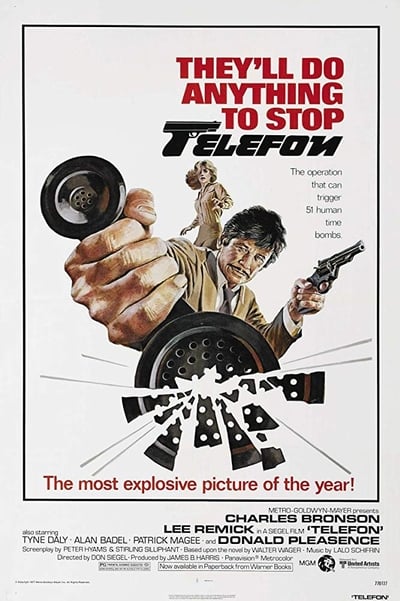 The KGB is looking for one of their people, a man named Dalchimsky because he has stolen something important but, unfortunately, he manages to get through the border. Later in the U.S. some seemingly ordinary people after receiving a phone call go out and destroy key American military installations. Back in the U.S.S.R. General Strelsky and Colonel Malchenko send for Grigori Borzov, a KGB agent who has been to the U.S. on missions before. They inform him that after the U-2 incident in fear of the possibility that a war with the U.S. will occur; they were part of an operation called TELEFON that involved recruiting young agents and then brainwashing them into believing that they are Americans. They would assume the identity of an American who died a long time ago and who would be their age now. They would be situated in a city that is near or where a key U.S. military installation is located. They were also programmed to destroy upon receiving the command phrase. They have been fortunate that they have never had to send them on their missions. But they believe that Dalchimsky stole the book that lists all the TELEFON agents and is now sending them out on their suicide missions. It also seems that the current KGB Chairman is unaware of TELEFON so Strelsky and Malchenko want Borzov to go to America and find Dalchimsky before he starts World War 3. Borzov, who is endowed with a photographic memory, memorizes the second TELEFON book and goes to America and is aided by Barbara.