Studios Before the System: Architecture, Technology, and the Emergence of Cinematic Space 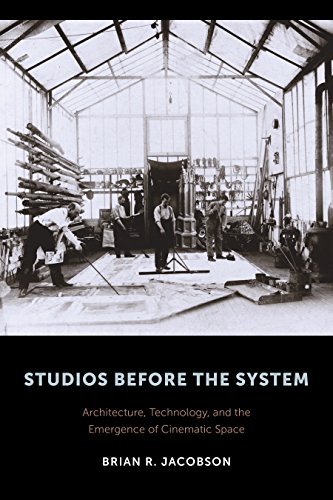 By 1915, Hollywood had become the epicenter of American filmmaking, with studio "dream factories" structuring its vast production. Filmmakers designed Hollywood studios with a distinct artistic and industrial mission in mind, which in turn influenced the form, content, and business of the films that were made and the impressions of the people who viewed them. The first book to retell the history of film studio architecture, Studios Before the System expands the social and cultural footprint of cinema's virtual worlds and their contribution to wider developments in global technology and urban modernism.

Focusing on six significant early film corporations in the United States and France―the Edison Manufacturing Company, American Mutoscope and Biograph, American Vitagraph, Georges Méliès's Star Films, Gaumont, and Pathé Frères―as well as smaller producers and film companies, Studios Before the System describes how filmmakers first envisioned the space they needed and then sourced modern materials to create novel film worlds. Artificially reproducing the natural environment, film studios helped usher in the world's Second Industrial Revolution and what Lewis Mumford would later call the "specific art of the machine." From housing workshops for set, prop, and costume design to dressing rooms and writing departments, studio architecture was always present though rarely visible to the average spectator in the twentieth century, providing the scaffolding under which culture, film aesthetics, and our relation to lived space took shape.
DOWNLOAD
(Buy premium account for maximum speed and resuming ability)

Search More...
Studios Before the System: Architecture, Technology, and the Emergence of Cinematic Space

Comments
No comments for "Studios Before the System: Architecture, Technology, and the Emergence of Cinematic Space".
Add Your Comments
Please Login to comment