Stalin's Agent The Life and Death of Alexander Orlov 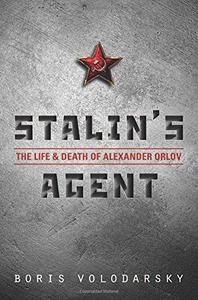 Stalin's Agent: The Life and Death of Alexander Orlov By Boris Volodarsky
2015 | 784 Pages | ISBN: 0199656584 | PDF | 7 MB
This is the history of an unprecedented deception operation - the biggest KGB deception of all time. It has never been told in full until now. General Alexander Orlov, Stalin's most loyal and trusted henchman during the Spanish Civil War, was also the Soviet handler controlling Kim Philby, the British spy, defector, and member of the notorious 'Cambridge Five'. Escaping Stalin's purges, Orlov fled to America in the late 1930s and lived underground. He only dared reveal his identity to the world after Stalin's death, in his 1953 best-seller The Secret History of Stalin's Crimes, after which he became perhaps the best known of all Soviet defectors, much written about, highly praised, and commemorated by the US Congress on his death in 1973.But there is a twist in the Orlov story beyond the dreams of even the most ingenious spy novelist: General Alexander Orlov never actually existed. The man known as Orlov was in fact born Leiba Feldbin. And while he was a loyal servant of Stalin and the controller of Philby, he was never a General in the KGB, never truly defected to the West after his flight from the USSR, and remained a loyal Soviet agent until his death. The Orlov story as it has been accepted until now was largely the invention of the KGB - and one perpetuated long after the end of the Cold War. In this meticulous new biography, Boris Volodarsky, himself a former Soviet intelligence officer, now tells the true story behind Orlov for the first time. An intriguing tale of Russian espionage and deception, stretching from the time of Lenin to the Putin era, this is a story that will send shockwaves through the world's intelligence agencies.

Comments
No comments for "Stalin's Agent The Life and Death of Alexander Orlov".
Add Your Comments
Please Login to comment