Programming Arduino With Python For Robots (2020 Edition) A Beginner to Advanced Reference Guide... 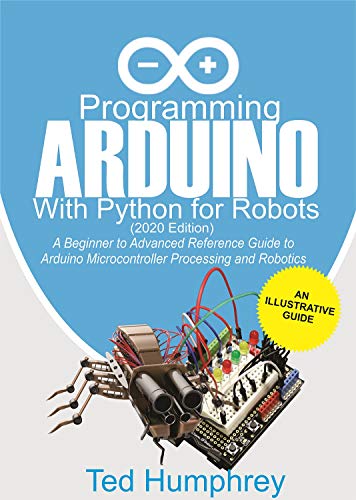 Do you want to program Arduino for robotics? Then read on...

The eBook also teaches you how to sketch on the Arduino IDE and then have your sketch carry out a lot of amazing control for you on the hardware interface. The book also features images put in proper places to help the readers grasp concepts with ease.

Other information you will get from this book include:
- CREATING THE PROGRAMMING ENVIRONMENT FOR PYTHON AND ARDUINO
- Getting Started with Python
- Installing Python packages
- Getting started with the python basics
- Controlling your output with escape sequence in python
- Breaking a long output line of characters
- Assigning Value to Python Variables
- Formatting Variable and String Output
- Learning about Python data type
- Allowing Python Script Input
- Python math operators
- Order of Operations
- Controlling the flow of your program
- Built-in functions
- Math operations
- INTRODUCTION TO ARDUINO
- Installing the Arduino Integrated Development Environment (IDE)
- Getting started with the Arduino IDE
- Arduino Sketch
- Working with the Arduino library
- The Arduino Built-in example sketches
- CHOOSING YOUR ARDUINO BOARD
- INTERFACING ARDUINO WITH PYTHON PROGRAMMING LANGUAGE
- Building Robots with Arduino
- Materials needed to get started
- And Lots More

Don't Wait Anymore, Scroll up and hit the BUY WITH ONE CLICK BUTTON to get this book in your library

Comments
No comments for "Programming Arduino With Python For Robots (2020 Edition) A Beginner to Advanced Reference Guide...".
Add Your Comments
Please Login to comment