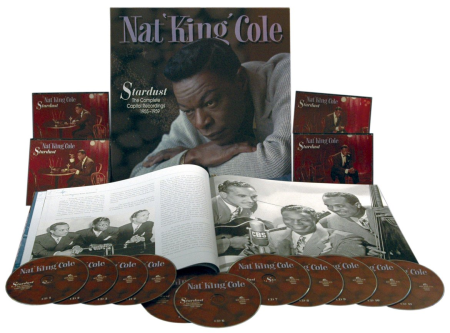 This is the first of two Bear Family boxes devoted to Nat King Cole, the second covers his final five years of recording (1960-1964) and together will form the definitive statement of the last and most amazing decade of one of the greatest stars of all

Nat King Cole (1919-1965) was the most popular male singer of his generation, and, along with Bing Crosby, Frank Sinatra and Elvis Presley, one of the four best known male vocalists of all . Making Cole's story all the more remarkable, he began his career not as a pop singer but as one of the greatest of all jazz pianists. Yet by the he had made the transition from jazz to pop, he had sold more records and racked up more hit singles than anyone in the immediate post-war era, even Frank Sinatra. He was also the first Afro-American pop music superstar - and still the greatest.

This Bear Family box contains Cole's complete recordings, all done for Capitol Records, of the years 1955-1959. The 11 CDs and 298 tracks contain a combination of Nat King Cole's most famous and most obscure work.

The set includes all the material for no less than 16 classic Nat King Cole albums: The two piano-centric albums of 1955-'56: 'The Piano Style' (with Nelson Riddle) and 'After Midnight' (with Sweets Edison, Juan Tizol, Willie and Stuff Smith) as well as the 'bonus session' for 'Penthouse Serenade.' The 1955 albums with Nelson Riddle, 'Night Lights' and the 'bonus session' for 'Two In Love.' The two classic albums with Gordon Jenkins, 'Love Is The Thing' (1956) and 'The Very Thought Of You' (1958), as well as the spiritual album with Gordon Jenkins, 'Every I Feel The Spirit' (1958). Nat's great jazz-ballad album with Billy May, 'Just One Of Those Things.' King Meets Count! Nat King Cole's classic meeting with the Count Basie Orchestra, 'Welcome To The Club' (1958), and another great album of swig standards from the same year arranged by Dave Cavanaugh, 'Tell Me All About Yourself.' Two best-selling albums recorded for the Latin-American market of classic Latin songs sung in Spanish,

'Cole Espanol' (1958) and 'A Mis Amigos' (1959). Two masterpiece albums with Nelson Riddle, 'To Whom It May Concern' and his magnificent album of W. C. Handy classics, 'St. Louis Blues,' both from 1958. The rock-inspired material that was later collected in the 'Looking Back' compilation LP, issued here for the first without the dreadful overdubbed rhythm sections that were added after Nat King Cole died in 1965.

In addition to these classic albums, the box contains nearly a hundred singles, which range from major hits like Ballerina, Looking Back and Non Dimenticar to some of the rarest recordings in his career, including many selections previously only heard as singles and EPs. All selections are presented without the overdubs that were often artificially imposed in the mid-'60s.

The 208-page hardcover book contains the most complete discography by Russ Wapensky, Jordan Taylor, Michel Ruppli & Richard Weize ever done of Nat King Cole's Capitol recordings in this period, along with hundreds of rare photographs of recording sessions from the Capitol archive, and reproductions of album and EP covers, and other Cole memorabilia and paraphernalia. The comprehensive liner notes are the work of Will Friedwald, that well-known Famous Author Dude.
DOWNLOAD
(Buy premium account for maximum speed and resuming ability)