Literacy in the Persianate World Writing and the Social Order 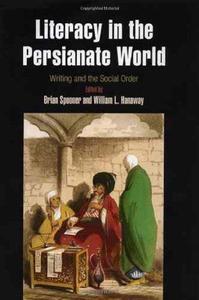 Literacy in the Persianate World: Writing and the Social Order By Brian Spooner, William L. Hanaway
2012 | 456 Pages | ISBN: 1934536458 | PDF | 5 MB
Persian has been a written language since the sixth century B.C. Only Chinese, Greek, and Latin have comparable histories of literacy. Although Persian script changed-first from cuneiform to a modified Aramaic, then to Arabic-from the ninth to the nineteenth centuries it served a broader geographical area than any language in world history. It was the primary language of administration and belles lettres from the Balkans under the earlier Ottoman Empire to Central China under the Mongols, and from the northern branches of the Silk Road in Central Asia to southern India under the Mughal Empire. Its history is therefore crucial for understanding the function of writing in world history.Each of the chapters of Literacy in the Persianate World opens a window onto a particular stage of this history, starting from the reemergence of Persian in the Arabic script after the Arab-Islamic conquest in the seventh century A.D., through the establishment of its administrative vocabulary, its literary tradition, its expansion as the language of trade in the thirteenth century, and its adoption by the British imperial administration in India, before being reduced to the modern role of national language in three countries (Afghanistan, Iran, and Tajikistan) in the twentieth century. Two concluding chapters compare the history of written Persian with the parallel histories of Chinese and Latin, with special attention to the way its use was restricted and channeled by social practice.This is the first comparative study of the historical role of writing in three languages, including two in non-Roman scripts, over a period of two and a half millennia, providing an opportunity for reassessment of the work on literacy in English that has accumulated over the past half century. The editors take full advantage of this opportunity in their introductory essay.

Search More...
Literacy in the Persianate World Writing and the Social Order

Comments
No comments for "Literacy in the Persianate World Writing and the Social Order".
Add Your Comments
Please Login to comment