Gender, Law and Economic Well-Being in Europe from the Fifteenth to the Nineteenth Century North versus South 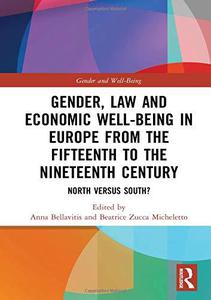 Gender, Law and Economic Well-Being in Europe from the Fifteenth to the Nineteenth Century: North versus South? By Anna Bellavitis (editor), Beatrice Zucca Micheletto (editor)
2018 | 298 Pages | ISBN: 1138571512 | PDF | 5 MB
This book offers a comparative perspective on Northern and Southern European laws and customs concerning women's property and economic rights. By focusing on both Northern and Southern European societies, these studies analyse the consequences of different juridical frameworks and norms on the development of the economic roles of men and women.This volume is divided into three parts. The first, Laws, presents general outlines related to some European regions; the second, Family strategies or marital economies?, questions the potential conflict between the economic interests of the married couple and those of the lineage within the nobility; finally, the third part of the book, Inside the urban economy, focuses on economic and work activities of middle and lower classes in the urban environment. The assorted and rich panorama offered by the history of the legislation on women's economic rights shows that similarities and differences run through Europe in such a way that the North/South model looks very stereotyped. While this approach calls into question classical geographical and cultural maps and well-established chronologies, it encourages a reconsideration of European history according to a cross-boundaries perspective.By drawing on a wide range of social, economic and cultural European contexts, from the late medieval to early modern age to the nineteenth century, andincluding the middle and lower classes (especially artisans, merchants and traders) as well as the economic practices and norms of the upper middle class and aristocracy, this book will be of interest to economic and social historians, sociologists of health, gender andsexuality, and economists.

Search More...
Gender, Law and Economic Well-Being in Europe from the Fifteenth to the Nineteenth Century North versus South

Comments
No comments for "Gender, Law and Economic Well-Being in Europe from the Fifteenth to the Nineteenth Century North versus South".
Add Your Comments
Please Login to comment