Below the Edge of Darkness A Memoir of Exploring Light and Life in the Deep Sea, UK Edition 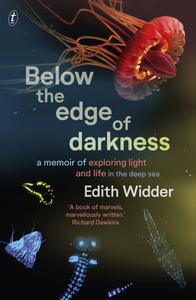 Below the Edge of Darkness: A Memoir of Exploring Light and Life in the Deep Sea, UK Edition by Edith Widder
English | August 14th, 2021 | ISBN: 1922330574 | 352 pages | True EPUB | 7.99 MB
Edith Widder grew up wanting to become a marine biologist. But after complications from surgery caused her to go temporarily blind while at university, she became fascinated by light, and her focus turned to bioluminescence. On her first visit to the deep ocean, in an experimental diving suit that took her to a depth of 250 metres, she turned off the suitʼs lights and witnessed breathtaking explosions of bioluminescent activity. Why was there so much light down there?

Below the Edge of Darkness takes readers deep into the mysteries of the oceans as Widder investigates one of nature's most widely used forms of communication. She reveals hidden worlds and a dazzling menagerie of creatures, from microbes to leviathans-many never before seen or, like the giant squid, never before filmed. Alongside Widder, we experience life-and-death equipment malfunctions, and breakthroughs in technology and understanding, set against a growing awareness of the deterioration of the world's largest and least understood ecosystem.
This engaging memoir, imbued with optimism and a sense of wonder, is an adventure story as well as a science story. Edith Widder shows us how exploration is the key to conserving the oceans-and our future on this planet.
Edith Widder is an oceanographer, a marine biologist, and the co-founder, CEO and senior scientist at the Ocean Research & Conservation Association, where she is developing technologies for protecting the ocean's estuaries. She has given three TED talks, and been awarded a MacArthur Fellowship, the Explorers Club Citation of Merit and, in 2020, the inaugural Captain Don Walsh Award for Ocean Exploration. In 2012 she helped capture the first footage of live giant squid in the deep ocean. Born in Massachusetts, she spent part of her childhood in Melbourne and later received her PhD from the University of California.
'Edith Widder's subject is light itself-the manufacture of light by strange and eerie denizens of the deep sea-and her scintillating style is worthy of it...A book of marvels, marvellously written.' Richard Dawkins
'Edie's story is one of hardscrabble optimism, two-fisted exploration and groundbreaking research. As I've said many times, I'd have wrapped my submersible, the Deepsea Challenger, in bacon if it would have lured the elusive giant squid from the depths. In Below the Edge of Darkness, Edie tells you how she did it.' James Cameron
'Luminous-the topic, the heroic journey, and the author herself. Dive in with Edith Widder, trail-blazing scientist and explorer, as she reveals the galaxy of light and life in the universe below the surface of the sea, out-shining sceptical male colleagues with dignity, grace and a robust sense of humour.' Sylvia Earle, oceanographer, founder of Mission Blue and National Geographic Society Explorer in Residence

Search More...
Below the Edge of Darkness A Memoir of Exploring Light and Life in the Deep Sea, UK Edition

Comments
No comments for "Below the Edge of Darkness A Memoir of Exploring Light and Life in the Deep Sea, UK Edition".
Add Your Comments
Please Login to comment