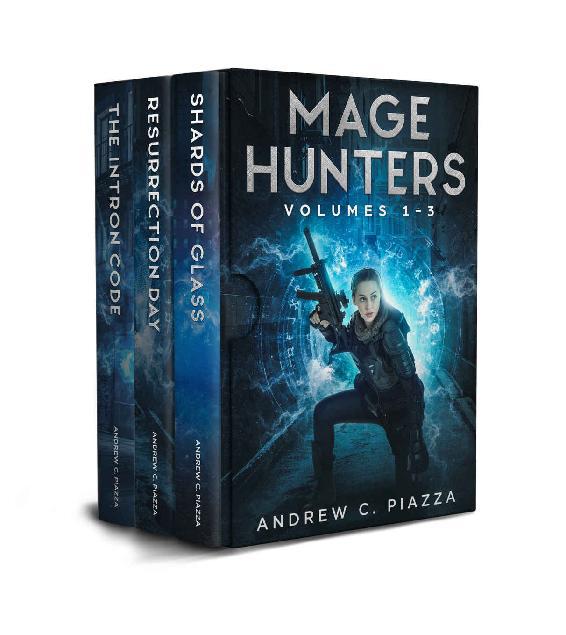 Get over 1,200 pages in three page-turning, pulse-pounding, action-filled thrillers following Cass Wheeler and her SWAT team of Mage Hunters! If you're looking for a good old fashioned shoot 'em up rollercoaster ride complete with magic and monsters, the "Mage Hunters" series is for you!

Magic. Machine-guns. Mayhem. SWAT teams versus rogue wizards... it's all in a day's work.

In a world where magic is mainstream, somebody's got to deal with the mages that go rogue. That somebody is Cass Wheeler, the leader of a specialized SWAT team tasked with bringing justice to those who use their magic towards nefarious ends. Now, she and her team of mages and shooters will face their most dangerous opponent yet: a master level wizard gone mad, holed up in a high-rise building and holding an entire city hostage with his powers.

Two squads have fallen to the master already... will Cass's team suffer the same fate?

Cass Wheeler, former SWAT team leader and premier mage hunter, has been wrongfully imprisoned in Trubuilt 187, a prison built to house the very same mages and criminals she's put behind bars. Now, when a mysterious outsider engineers a lethal prison riot to take over the prison for unknown purposes, Cass is forced to take action.

Along with Dread, her former partner and lover, and new allies, she must face down an enigmatic death mage and thwart her murderous plans to take control of the prison, or risk becoming yet another victim of the necromancer's diabolical plot for power and domination.

Full of magic, pulse-pounding action, and suspense, "Resurrection Day" will keep you up at night turning the pages until the explosive conclusion.

A death mage at large. A magical weapon of mass destruction. A city in peril.

In the aftermath of the destruction of Trubuilt 187 prison, Cass and her team of mage hunters discover that the death mage Kel and her protege Fly are moving forward with their plans for power and domination. Even worse, more rogue mages have emerged from the shadows, some allied with Kel and some in competition with her for the power that the mysterious Intron Code can bestow.

Can the Mage Hunters unravel the mystery of the Intron Code and defeat the death mages before the entire city is torn apart?

Third in the innovative and action-packed "Mage Hunters" series, "The Intron Code" will keep you turning the pages until the explosive conclusion.